On Tuesday, September 1, 2020, we will not only reopen the University Computer Centre after the quarantine closure but this day UCC also celebrates the 20th anniversary of its existence. What was behind its establishment, and what journey has the UCC taken since then?

The proposal for establishing a University Computer Centre came from the Institute of Computer Science in early 2000. At that time, the universities and society's computerization began to multiply, so it was necessary to improve the availability of IT technologies for university students fundamentally. Users' equipment with personal computer technology was low at that time. Few people owned a personal computer, laptops were rare, smartphones did not exist yet. Internet connection was available only for a few connoisseurs.

Therefore, we set up a computer study room, which was easily accessible to students from all over the university, thanks to its location in the center. It is equipped with personal computers with many programs and with trained staff able to advise students. And above all, it was and still is in operation non-stop – 7 days a week, 24 hours a day. Students with a higher need for access to a computer could use less frequent night or weekend times without having to fight for a computer with a mass of people at a busy time of day. The computer study room conceived in this way was the first among the universities in the Czech Republic.

In the Faculty of Medicine premises on Comenius Square, we opened UCC to users on September 1, 2000. At that time, it was equipped with 106 personal computers with the Windows 2000 operating system, office tools, multimedia equipment, and, most importantly, a fast internet connection. Over time, printing, copying, scanning, and other services were also available.

From the very beginning, the interest of students exceeded even the most optimistic expectations. In the first year, UCC was open 355 days 24 hours a day (8,536 hours of virtually non-stop operation). During that time, 9,815 students (half of the then university students) visited it on average almost 40 times with 363,167 visits per year. In the following years, the attendance of the study room stabilized at around 400,000 visits per year – in busy times, even long queues of people in front of the study room were standard.

total printed pages of the paper

is a record annual attendance (the year 2004)

We are Improving according to Users' Suggestions

To permanently ensure the needs, it was crucial to follow users' opinions and requirements, i.e., students. In 2002 and 2004, FSS students conducted an extensive sociological survey "UCC through the students' eyes," the UCC Council was established, and later the UCC Association. The surveys showed generally positive evaluations and exciting stimuli for further development. The only fundamental and the repeated complaint was the insufficient capacity of the study room. Therefore, in the following years, we created faculty computer study rooms and incorporated them into the unified network's university computer rooms.

The UCC itself has been continuously developed, reconstructed, and changed over the past twenty years. Due to the enormous load, it was necessary to completely modernize all its technical equipment after the first three years of operation. In 2006, in addition to the change of equipment, we also carried out extensive reconstruction of the study room premises and its facilities. Further modifications and reconstructions took place in the following years (so far, the last major reconstruction took place in 2018).

Even after twenty years, UCC has not lost its significance and contribution. Although students usually have their computers and laptops (it cannot be compared at all with the situation twenty years ago), interest in using the study room and their services are not declining. Even last year, 300,000 visits were registered (in the past 20 years, it was 6,5 million visits). In addition to the access to computers and the Internet, the possibility of social contacts and teamwork at any time of the day or night is also appreciated.

In addition to the study and quiet zones (currently 115 computers and a separate room for fast WiFi connection of laptops), the current study room also offers a social zone for group work and possible relaxation. The offer of accompanying services is also continually expanding. Today it includes, for example, large-format pringting and 3D printing or an online IT ServiceDesk. 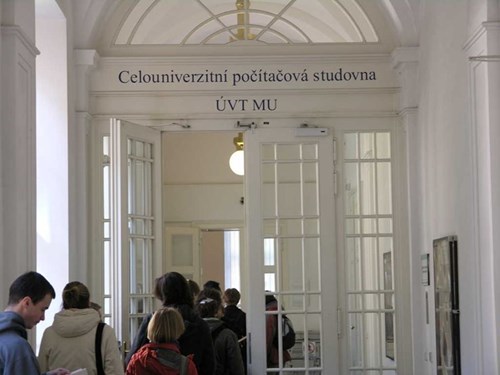 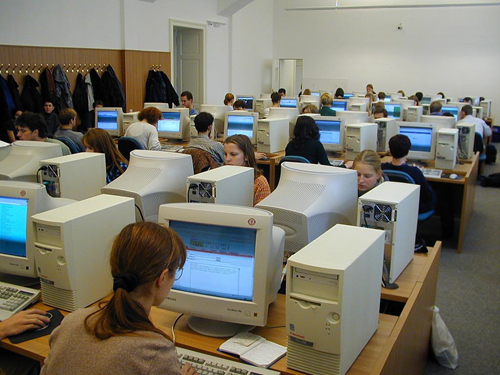 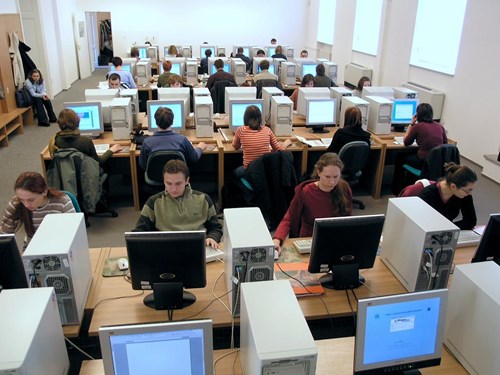